People have really strong opinions about cinnamon rolls. Nuts or no nuts? Frosting or no? Orange flavored, or just traditional cinnamon? Buttery dough? Raisins? My mom will not touch a cinnamon roll unless it has raisins. Whatever. I have my own opinions. Let’s start with the dough. I have tried various doughs over the years. Last year, I decided to take a cherished dinner roll recipe and convert it to cinnamon rolls. Man oh man. My good friend RB gave me permission to publish her dough recipe here. RB does something ingenious to her dough–in addition to yeast she adds a teaspoon of baking powder. How smart is she? She’s actually incredibly smart, but that’s another story. Friends, in honor of Tortillas and Oranges’ new site, I offer you a gift–my most favorite Cinnamon Roll Recipe. Enjoy. And if you live by me, bring me some.

Pour warm water in mixing bowl, warm enough that you can just see a little steam rising. Sprinkle yeast on top, don’t stir, and let it proof. Add the sugar to help it along. Wait about 5 minutes or so. 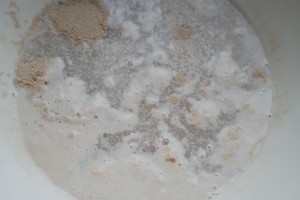 "Proofed" yeast should look like this. A bit dissolved and bubbly.

Heat the butter in the microwave for about 40 seconds until it’s soft and about half melted. Add the eggs and butter. Stir the dry ingredients together and add them to the dough, mixing with dough hook for about 5-10 minutes.(Okay, I have to be honest with you. I don’t use my dough hook. After the yeast proofs and bubbles, I toss everything else into the same large bowl and mix together with an old fashioned wooden spoon).  The dough should be kind of sticky. 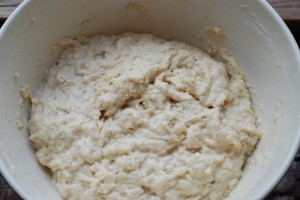 Don't be afraid of sticky dough.

Scrape the dough down the sides of the pan, and cover the dough with plastic wrap sprayed with PAM (put right on top of the dough, not over edges of bowl). Let rise until double or more. Cut dough in half and roll it out on a pastry mat or cutting board. Roll out in a big rectangle and spread with soft butter, and sprinkle with inside mixture (brown sugar and cinnamon) . Roll up in a big roll, then cut with with your very sharpest knife into one-and-a-half-inch slices. Put slices on a jelly roll size pan (for half the dough). Repeat with second half of dough. 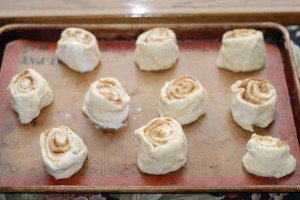 Your 1 1/2 inch high cinnamon rolls may seem a bit tall, but trust me. You want them that way.

Remove cinnamon rolls from oven just as they start to turn golden. Frost those babies while they are warm. You’ll think they are too good to be true.

If you enjoyed this article, please consider sharing it!

Use the form below to search the site: